Welcome to my blog! Happy you found me! Don't take the things I write too serious, I don't.

When Forest Gump spoke his famous line "Life is a box of chocolates, you never know what you are going to get", he might as well have been speaking about the roads in India.
I have never under my 37 years and 40+ countries visited, seen anything like it. It is, without exaggeration, extraordinary.
With a driver, my two friends and I spent 10 hours in a car going from Delhi to Taj Mahal yesterday and I found every second highly entertaining. It's only 220 km (138 miles) but with the roads and it's occupants it's hard to break the 5 hour barrier each way.

People had told me that I would see everything on the roads here. Cows, pigs, donkeys, monkeys, elephants, goats, water buffalo. Little did I know that reality would exceed my imagination.

It's started off with a lorry crash on the highway early in the morning. Since our side was blocked, people, us included, made the executive decision to turn around, drive against the traffic, make the first U-turn, go against the traffic on the other side and when the accident were behind us, cross back over to the right side of the road. All of this while it was still dark out.
Kajsa, Bo and I were, of course, a bit surprised at this strange way of going against traffic. The only time we see that at home is on the evening news. Little did we know that it was far from the last time we saw that this day. We had all sorts of stuff going against traffic. Granted, most of it on, or fairly close to, the shoulder. Highlight in the going-against-the-traffic department was won by not one, but two, not at the same time I have to mention, horse and carriage rides coming against traffic in our fast lane.


For as long as we spent in the car I can't remember seeing one single traffic light. The intersections were free-for-alls. Someone should build a hotel at an intersection in India and charge "sea view rates" for the rooms facing the street. They are that entertaining. Not only did you have all the animals and cars. You had bicycles, motorcycles, tractors, lorries and buses using up every free inch available. It was like the post office slogan "if it fits, it ships". If you could fit into the space you saw, that is were you were going. That's is probably why most cars had their rear view mirrors tucked in. That or the fact that they would be taken out if you left them out.


Since they go under the motto "if it fits, it ships" white lines are pretty useless. If you can squeeze three cars in two lanes, you will see three cars and a donkey pulling a vegetable van. Doesn't matter in what direction any of them are going.


We took little over and hour to walk around the Taj Mahal and it really deserved to be one of the seven wonders of the world. When we first came thru the archway, it looked fake it was so white. I guess when you build something out to only white marble, it going to be white.. Construction during day and night for 22 years with 20,000 people working, the eye for detail is extraordinary. You really have to see it to understand it. Built between 1631-1653, it's really a tomb for one of the sultans wife that died at child birth. He also built a mosque to the left of it and then decided on a guest house to the right of it so it would look submetrical. No one ever stayed in the guest house. Why he decided on a guest house next to his wife's grave is a bit odd if you ask me.
He was planing on building a black Taj for himself across the river but his son convinced him to stop waisting the tax payers money. The son became very popular with the people and went on to rule for a very long time.


So while I did learn some great stuff about the Taj Mahal, what I learnt on the street was almost better.
To summarize my trip I would say I know that direction is merely a suggestion, intersections are entertaining and white lines are a waste of paint.

What else did I learn?

I learned that if it's a big white round thing in front of you, it's being pulled by an extremely old tractor or a camel.

I learned that you can fit 15 people in a tuck tuck.

I learned that cows like the median strip of the highway cause the breeze from both directions keep the flies away.

I learned that you honk the horn to announce you are coming, not cause you are pissed off and you want someone to move.

I learned that cows rule and dogs get run over.

I learned that you shouldn't drive a scooter behind a woman throwing up.

I learned that if you take a picture of a monkey with a dress and lipstick on, the owner is going to want too much money.

I learned that you yield for herds of water buffalo.

I learned that road rage doesn't exist even thou it would be a prime location for it.

I learned not to have my camera in my lap when a monkey on a stick comes and breathes on my car window.

I learned that if you load a lorry with 100 bags of rice unevenly, it going to turn over.

I learned that only the driver of the motorcycle is required to wear a helmet. His wife and 2 children are not. 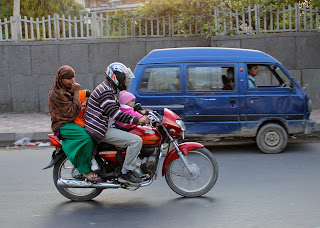 If you ever have the opportunity to go and see this vastly different country, I would warmly recommend it. Not just for the fact that you can have curry morning, noon and night but it's one of those, you-have-to-see-it-to-believe-it places. It is, as the CNN commercial says, Incredible India

Posted by Sophie Gustafson at 6:55 AM 24 comments

Sophie Gustafson
Swedish girl who plays golf for a living. Traveled the world for the last 15 years and still there is no end in sight. Think that is a good thing :-)